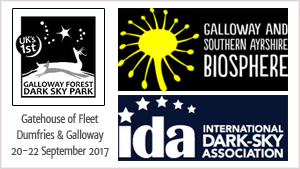 Galloway and Southern Ayrshire Biosphere, in partnership with Galloway Forest Dark Sky Park and with the support of the International Dark Skies Association have been selected to host the very first European Dark Skies Conference.

The conference will be held in one of the very best places to observe the night sky - Galloway in South West Scotland and in the heart of the UNESCO Galloway and Southern Ayrshire Biosphere. This is a world-class environment designation awarded to places that promote and demonstrate a balanced relationship between people and nature.

Light pollution refers to the effect of light on the visual environment during the hours of darkness. The majority of this light pollution is from urban sources such as street lights, dwellings, office blocks, municipal buildings and factories.

As we become more urbanised and pollute ourselves with more and more light we are losing the ability to see the stars which informed the lives of our ancestors. Light pollution will be a major global issue for the 21st century. We have only just begun to understand the decisive impact of the clarity of the sky on the conservation of biological diversity and ecosystems and the role of darkness on the health and well-being of humankind.

The following themes have been chosen as a basis for discussion:

Scotland has some of the darkest skies in Europe and Galloway Forest Park is one of the darkest places in Scotland, which is why it was selected to become the UK’s first Dark Sky Park. So few people live within the Forest Park that the nights really are inky black, making it an exceptional place to enjoy the stars.

On a clear night, over 7,000 stars and planets are visible with the naked eye from the Forest Park, and the bright band of the Milky Way is usually easy to see arching across the sky. There’s a new show every night because, as the earth travels around the sun, there is a constantly changing view of the stars. 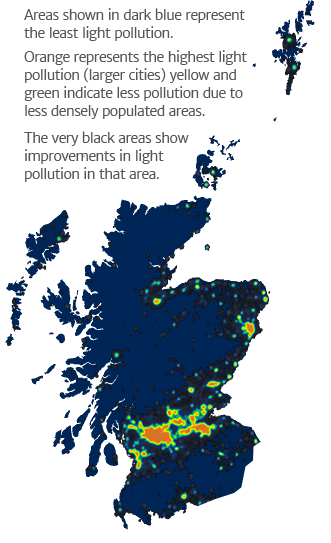 The SQM scale runs from 0 to 25 and to put it in context, in the middle of a major city such as Glasgow or Edinburgh, you would get a reading of around 8, whereas a reading of 24 would be measured in a photographer's dark room.

Based on this scale, the Forest Park’s score gives us as near to total darkness - meaning clear, starry skies for all to enjoy (weather permitting of course).

The map shows the man-made light distribution in Scotland. Those huge tracts of land in dark blue are, for the most part, close to the Forest Park score.

As a potential asset to attract tourists, fledgeling companies are testing the water by developing short breaks for amateur astronomers to allow them access to these dark skies. The weather is the only drawback as adverse conditions would prevent any meaningful observations, however, the late Autumn right through to early Spring could provide an interesting break for tourists outwith the normal season.

Scotland has also been blessed with the potential to witness the Aurora Borealis (also known as The Northern Lights) when conditions are conducive. This spectacular display of moving, shimmering ribbons of light is caused by "solar storms" (large quantities of charged particles ejected from turbulent events on the surface of the sun). These fast-moving charged particles are also known as the "solar wind" and as they collide with the earths magnetosphere, they concentrate near the poles and produce an amazing light show.

The further north you travel, the greater the likelihood of viewing the aurora. The aurora is recognised in folk lore and music - eg, the famous song "The Northern Lights of Old Aberdeen" and the Outer Hebridies, Sutherland, the Orkneys and the Shetlands witness the best and most numerous displays.

On rare occasions, the display can be viewed from further south, sometimes as far as Southern England in exceptional circumstances.

The "Central Belt" has the highest concentration of Scotland's population - yet even here, despite the high light pollution, an amazing atmospheric display was witnessed just one week after the spectacular light show that marked the handover of the Queensferry Crossing to the Scottish Government. 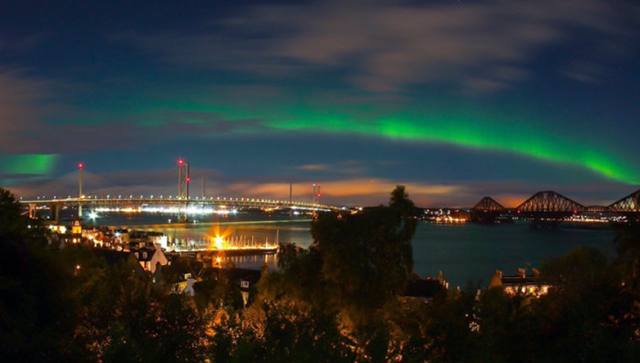 It is a long exposure of the Aurora that appeared the previous night.

The photograph is looking north from South Queensferry, the southern approach to the three bridges. 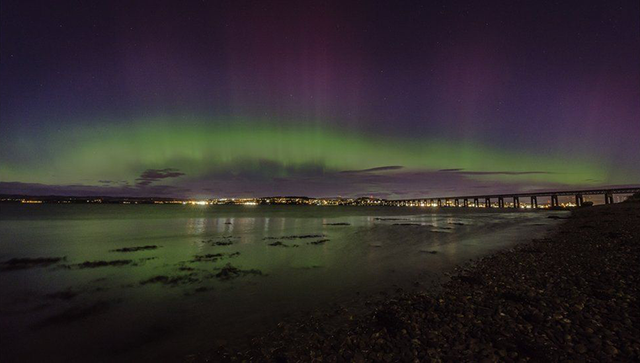 This long-exposure image was also captured on the same night.

It looks north from the southern approach to the Tay Bridge with the City of Dundee beyond.

The Cause of The Aurora in Detail.

The Northern Lights are actually the result of collisions between gaseous molecules and atoms in the Earth's atmosphere with charged particles released from the sun. Variations in colour are due to the type of gas involved in the collisions.

The most common auroral color, a pale yellowish-green, is produced by oxygen molecules located about 60 miles above the earth. Rare, all-red auroras are produced by high-altitude oxygen at heights of up to 200 miles. Nitrogen produces blue or purplish-red aurora.

The animation shows the Aurora from space.

Thanks to research conducted since the 1950s, we now know that electrons and protons from the sun are blown towards the earth on the 'solar wind'. (Note: 1957-58 was International Geophysical Year and the atmosphere was studied extensively with balloons, radar, rockets and satellites). Rocket research is still conducted by scientists at Poker Flats, a facility under the direction of the University of Alaska at Fairbanks. 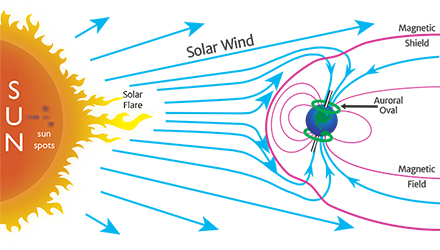 The temperature above the surface of the sun is millions of degrees Celsius. At this temperature, collisions between gas molecules are frequent and explosive. Free electrons and protons are thrown from the sun's atmosphere by the rotation of the sun and escape through holes in the magnetic field.

The lights of the Aurora can extend from 80 kilometres (50 miles) to as high as 640 kilometres (400 miles) above the earth's surface.

The connection between the Northern Lights and sunspot activity had been suspected since about 1880 and has been confirmed by many years of observation. Sunspot activity tends to vary in a cyclic fashion, reaching a maximum every 11 years. This activity is mirrored in the frequency and magnitude of the aurora.

Apart from the spectacular display we see as a result of the solar wind, there are also very real dangers to the health of satellites both in near-orbit and far-orbit from the consequences of huge "solar flares" that can occur at random. These flares are massive eruptions of highly charged solar material that arc within strong magnetic force fields - eventually returning to the surface of the sun. Every now and again, the ejection force is stronger than the magnetic forces that normally re-captures the material and it is released into space. This massive release of highly charged, fast-moving particles forms an advancing wave that represents a real threat to the health of sensitive electronic circuitry and components when it hits. This has lead to fears of catastrophic consequences for communications satellites in particular, but also has the ability to affect terrestrial power grids and communications networks.

Thankfully, normal levels of solar activity - even at the peak of the 11 year cycle - do not create a threat to communication satellites and rogue ejection events, although very real are also very rare.

Skyglow - view the UK in terms of light emmissions