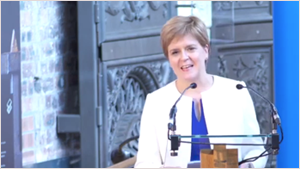 This is a video of the Q&A session of the 50th Travelling Cabinet event, recorded live in Stirling.

Questions were unknown by the FM or the Cabinet Members ahead of time.

The questions were asked by members of the audience and answered thereafter by the appropriate Minister and in many cases by the FM herself.

Questions were also received from members of the public via email and social media (The appropriate contact details are posted throughout the video).

Questions that were unable to be fully answered on the night would be followed up by a detailed answer delivered by letter or email to the person who posed the question.

Over refreshments, shortbread and gingerbread, a further hour-long opportunity was made available to chat to any member of the cabinet or the FM face to face.