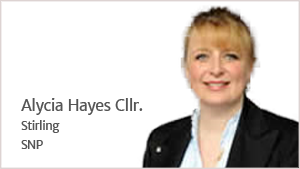 From 1 April 2016 the Scottish Parliament will have responsibility for a Scottish Rate of Income Tax.

This responsibility will be a partially devolved power.

At a first glance, this looks like a useful power - but there is a sting in the tail.

To see how this would affect the tax generated, let's make a start by looking at the way the tax bands are set.

Tax is collected according to 'bands'. These bands define ranges of income and apply a specific tax rate to each.

These bands are set by the UK government and currently (February 2016), apply to Scotland too. The current values are shown in the first and second columns.

When the partial income tax power is devolved in April 2016, a reduction of 10p in every taxable pound will be implemented. This translates as one percentage point for every penny and is shown in the third column.

To appreciate how this system works in practice, let's take a brief look at how tax is calculated on annual earnings. To keep things simple, we will stick to the UK national rates and won't confuse the picture with tax credits and other factors. For the time being, we just want to see how the tax bands work.

This amount falls into the Basic Tax Band and is taxed at 20% returning £1,640 to the Treasury.

As in Example 1. the personal allowance of £10,600 is subtracted from the total.

So, we subtract the Basic rate limit from the total to find out how much will be taxed at the higher rate, then calculate the two tax amounts.

Adding these two amounts returns a total of £8,683 to the Treasury.

This income spans all three taxable bands and the values and tax generated is as follows:

Adding these three amounts returns a total of £52,423 to the Treasury.

In April 2016, the UK government will reduce each tax band by 10% in Scotland (or reduce each taxable pound by 10p if you prefer). This will immediately affect the financial calculations that determine the funds allocated via the Barnett Formula due to the reduced revenue sent to London in income tax. The recently devolved tax power will allow John Swinney to determine what additional tax raising measures he would recommend to restore the budget shortfall.

In response to the new power, on the 11th February, 2016, the Scottish Parliament took its very first vote on setting the tax rate. With an overwhelming majority, MSP's voted to adopt John Swinney's recommendation of 10p (10%) and this will be the rate that will apply for the 2016/2017 financial year. This will restore the rates back to the UK national values. From this point on, we will refer to this as the Scottish Rate (SR). Essentially, we are neither up nor down and everything is roughly as it was (except Scotland now has to foot the bill for the collection of the devolved tax).

As previously mentioned, at first glance, the new power would appear to offer a way of collecting more tax - and it does if the rate is set beyond the confirmed 10p base rate. However, its not as straightforward as that. Like so many 'concessions' from Westminster, there are often hidden consequences. In this case, the terms and conditions specify that any increase or decrease from the 10p base rate must happen equally across all the bands.

Surely that would mean the same rise for every tax payer if the rate was increased? Isn't that fair?

Well, yes and no... Let's look at some examples of how the rate change would work for a range of incomes. We will assume an increase from 10p to 11p for the SR. I've put the results in a table (Table 2) so we can see the comparisons better.

What is immediately obvious is that those with low earnings see a greater percentage increase than higher earners. Low earners will have all their taxable income firmly within the Basic Tax Band and the effect of raising the tax by just a single penny results in a whopping 5% increase in the tax they pay. Compare this to the higher earners who have part of their taxable income in the High Tax Rate Band and the percentage drops considerably. The higher earners pay a lot more in tax in terms of hard cash, but the percentage of their overall earnings is very much reduced.

Essentially, lower paid earners will feel the increase in tax a lot worse than the higher paid earners will. For those at the lowest end of the pay scale, this will definitely mean additional hardship and in many cases will actually push them further into in-work poverty. In-work poverty is the ridiculous situation where an income derived through employment is not enough to sustain an acceptable standard of living.

Clearly, this is extremely unfair for the majority of Scotland's workforce who have earnings that lie, for the most part, in the Basic Tax Bracket (20%). Since there is no provision to adjust individual rates, the Scottish Government has set a 10p rate, effectively ignoring the new 'power'.

We are now in the position of possessing a devolved power, but because it is practically useless, no sane administration would fall into the trap of using it.

This brings us on to the recent proposals from Labour and the LibDems - who want to use the power and raise income tax by a penny!

It all sounds great, but...

The Scottish branches of Labour and the LibDems have announced they support an increase in the Scottish Rate from 10p to 11p. We have already covered most of the general impact this would have on Scotlands tax payers and acknowledge that the majority view is to leave the rate at 10p. However, Labour and the LibDems have been pretty adamant they could make the increase work. The LibDems have been somewhat vague about countering all the problems the increase would cause low earners, but Labour have announced they have the answer in the form of a rebate, paid via local authorities.

These are bold claims. The Holyrood elections are getting close and this proposal has already been used to criticise the decisions made by the Scottish Government concerning the use of the "new tax raising powers". It would be fair to assume this may become a political football in the campaigning period.

As the main opposition to the Government, Labour is tasked with holding it to account. However, their activities in this area must be credible and based on well thought-out planning.

Let's see how their tax proposals stack up.

So that's all we know about the proposed changes - no fine details, in fact, no rough details either.

However, we should attempt an analysis anyway and see if there is a way to implement the tax raising power with some sort of mitigation for those who will be hardest hit.

Starting with point 1, we already know the impact a 1p increase will have on the tax paid by lower paid workers - and it isn't a rosy prospect. Despite Labour's plan to mitigate the effects on the lowest paid, it will still push other folk into working poverty. In addition, the 1p tax increase will favour higher paid workers - causing an unwelcome increase in the wealth gap. So much for those with the broadest shoulders carrying more of the load.

Point 2 covers the rebate - but doesn't give any details. Questions that need to be answered are:

Point 3 mentions the rebate for pensioners. This didn't appear on the original proposal, but was hastily added after scrutiny under questioning in the Holyrood chamber - surely this shows a lack of planning and understanding and also hints at the complexity of the whole idea.

Point 4 addresses the amounts that would be raised and repaid by rebate. It doesn't give any detail about the administration methods or costs. Due to the complexity of the proposed rebate, this will likely be a very costly undertaking.

It looks like any attempt to gain extra revenue from this rather devious power is a non-starter. There are clearly issues of serious inequality, increased hardship and the administration looks like a complete nightmare.

After weighing up the pro's and con's, the majority decision to keep the SR at 10p is surely a resounding testament to the unsuitability of this route to extra tax generation.

Much is made of the 'generous powers' that have been devolved to the Scottish Parliament. The media and most of the Westminster MP's delight in pointing out the apparent reluctance of the SNP government to use all these 'amazing tax raising powers', and in addition, they are accused of unreasonably asking for more.

In reality, this partially devolved Income Tax power is fraught with problems. It is extremely inflexible and as a consequence is practically useless. The naïve attempt by Labour to incorporate it into a fund raising mechanism has showed just how problematic this so called 'power' is and it also highlights the difficulty in mitigating the effects on those who are most disadvantaged by its use.

It is abundantly clear that this devolved power was deliberately designed this way. There can be no other rational conclusion. What we have now is a costly undertaking to raise a section of income tax in Scotland that is exactly the same amount that was originally raised by the UK treasury. Any attempt to raise taxes by this power will disadvantage lower paid earners and advantage high paid earners by virtue of a clause that prohibits variations within the bands - a condition that was placed in the terms of use, surely this was not accidental.

Using this power in its present form is something that most people would consider morally wrong - and this was demonstrated by the vote to retain the 10p rate, effectively ignoring the tax raising facility of the power. Its rather telling that the Westminster establishment thought this was an appropriate implementation to devolve. They must also be aware that by failing to use this tainted power, Scotland has been forced to embark on a costly tax-raising venture that ultimately will make no difference to the amount of tax generated.

The amount of underhand manipulations in such a simple piece of legislation is far-reaching and it must be concluded that this devolved power was designed with no other purpose than to hamper the governance of Scotland, financially undermine the majority of tax paying Scots and consequently damage confidence in the competence of the Scottish Government.

So, with our amazing tax raising power finally put to work, nothing has changed for the better. It will be interesting to see what devious ploys are set to come our way in the near future.

Its so nice to be "Better Together".