The Story (so far)

On Thursday, 18th September 2014 the people of Scotland voted to decide "Should Scotland be an independent country?". 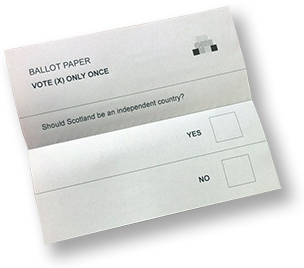 From an electorate that numbered approximately 3.6 million, this simple Yes or No question returned a result of 45% for 'Yes' and 55% for 'No'.

This fairly decisive win for the No vote seems, on the face of it, to leave the matter settled. However, there is more to that result than meets the eye. To better understand the outcome, the following brief description of the events leading up to the vote (and beyond) should be helpful.

The format of the referendum question and the voting options were decided and an agreement to respect the outcome of the vote was made between the Pro-Independent 'YES' campaigners and the Unionist 'NO' campaigners.

The ballot would be based on a single question: "Should Scotland be an independent country" and the voting options would be a straight Yes or No. Vigorous campaigning by the Yes camp (and a number of other bodies) for a third option - Devo Max (full fiscal autonomy for Scotland within the United Kingdom) was stubbornly denied by Westminster. Eventually, despite mounting pressure to include the third option, the UK Government got their way and the original Yes/No options were adopted. A date for the referendum was set for 18th September 2014.

Opinion polls showed the No campaign well ahead of the Yes campaign at the start of the campaigning period. This gap remained fairly constant for the majority of this time, but as the voting day grew closer, a distinct rise in the Yes support became apparent. This rise gained momentum and as the final weeks of campaigning approached, the Yes camp overtook the No camp for the very first time with a 51% majority in a major poll. This development signaled a very real threat to the No campaign - who then went into a blind panic and bombarded the Scottish Electorate with extremely intense campaigning. During the final week, the No campaign adopted a 'win at all costs' approach - after all, the very survival of their United Kingdom looked in doubt. Emotiotional pleas for Scotland to remain within the UK came thick and fast - as did vicious scaremongering designed to thwart support for independence. When the polls showed no movement from that narrow Yes majority, the No camp stepped up their efforts once again. The promise of 'home rule', 'near Federalism' or 'Devo Max' was made by former UK Prime Minister, Gordon Brown, speaking on behalf of the No Campaign at a packed venue which was broadcast to the nation. 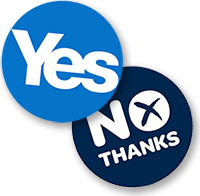 This promise was not contested by the three leaders of the main Unionist political parties (who also made the famous 'VOW', circulated on the front page of leading newspapers, which appeared to offer something similar). In effect, the full force of the Westminster establishment seemed to be endorsing the third option (the one they absolutely refused to allow on the ballot paper in the first place).

With this assurance of Devo Max, many swithering voters embraced this new development and unsurprisingly, the referendum was won by the No vote. The Establishment tactics used were dubious at best, broke purdah on every level and, as we have since witnessed, deliberately promised far more than would ever be granted.

Since the result, the Yes movement has continued to grow. The reasons for this are many and complex, but the failure of David Cameron and the UK government to fulfill their vote-winning promise has played a big part. Scotland has become a place where ordinary people are discovering their voice - and they are also showing a strong desire for social justice and an appetite for self-determination. Many, many Yes voters feel cheated by the tactics used by the No camp in the final days of the referendum - and many who voted NO are also realising they were duped. Nothing like Home Rule or Devo Max has been remotely delivered, and the powers that will be granted are watered down versions of what was promised in the Smith Commission - which incidently recommended devolved powers far short of that which was originally promised anyway. Incredibly, the Unionist parties now proclaim the vow has been settled in full and that the question of Scottish Independence has now been settled.

Just one year after the referendum, a huge shift has occurred in Scottish Politics.

In the 2015 General Election, the SNP experienced a landslide victory in Scotland and 56 SNP MP's now sit in Westminster, leaving only three Scottish seats for the Union parties (one each as it happens). The rise in support for the SNP has been unprecedented as their membership has gone from around 15,000 before the referendum vote to well over 110,000 after it. Labour in Scotland has been decimated and is in melt-down. Conservative support is just as low as it has always been and the LibDem support has completely collapsed. Other pro-independence parties like the Scottish Greens and the SSP (Scottish Socialist Party) have seen an impressive increase in support. Amazingly, after such a harrowing defeat, the Yes movement has been re-animated and is now as strong as ever. 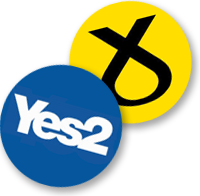 Recent opinion polls show that the majority of Scots are unhappy with the outcome of the referendum and there is a strong desire to hold another vote on Scottish Independence. Many are impatient for this to happen, but it MUST NOT take place before the electorate can be made aware of the honest facts surrounding Independence. We also need a place where all the facts and ambitions for an Independent Scotland can be posted and viewed by all - and there must also be facts pointing to valid counter-arguments where appropriate.

We must have a fully informed electorate and a level playing field. This is where the last referendum was lost. Despite an extremely forward thinking, positive, inclusive campaign by the Yes camp, they were shown to have weak arguments in support of Europe and the Currency we would adopt. In a future referendum, we must insist that an independent authority should oversee the actions taken during the campaigning period and breaches of the rules must be dealt with quickly and effectively. This independent watchdog cannot belong to any agency of the UK government. The same goes for the monitoring of the voting process with particular emphasis on the handling of postal votes and who can actually vote.

This, then, is the reason for this site. Let's get our fact's right and stop the appalling spread of lies, fear and scaremongering we saw last time. Knowledge is power - let's use it for the common good and in the next referendum, Scotland will make its decision based on hard facts - and settle the matter once and for all.

One year on, thousands of enthusiastic supporters of Independence attended the 'Hope over Fear' rally in George Square, Glasgow, 19.09.2015. People from all walks of life, with a variety of political persuasions and aged from grandparents to grandchildren were entertained by speakers, musicians and comedy acts throughout the day.

One special highlight was the appearance of the 'Yes Bikers' who started their run in Stirling. They collected their members at various points along the route which passed through a number of small villages and larger communities too. This culminated in a convoy of over 100 strong when they arrived at George Square.