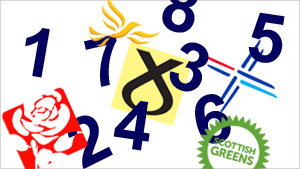 All you need to know about the Scottish Local Election voting system.

There are currently 32 Regional Authorities, also known as Local Councils. Every 5 years, we elect our representatives (Councillors) to these Councils by the Single Transferable Vote System (STV). The STV system is designed to reflect the order of preference Voters place on the Candidates who stand for election.

This is a system that is designed to allow more than one Candidate to be elected in a fair and representative way. Behind the scenes (at the counting stage) the process can become increasingly complex - but as far as the Voter is concerned, casting their vote is fairly easy to understand.

This short article attempts to demystify the STV system and includes an easy to follow video which demonstrates the main mechanisms of the system.

As previously mentioned, Scotland is organised into 32 Council Areas. Within each area, further sub-division takes place to create Wards. It is at the Ward Level where the elections take place.

Each Ward may allow 3 or possibly 4 Councillor positions (Seats) and a variety of Candidates may stand for election. The larger Political Party's will decide on how many Candidates to stand. Independents, who usually have no association with any Political Party may also stand. Many Independent Candidates will stand to promote a particular local issue, they may be a previous Councillor with a good track record or they may simply be a popular local figure. The STV system provides a healthy mix of Candidates and gives the Voter more choice. 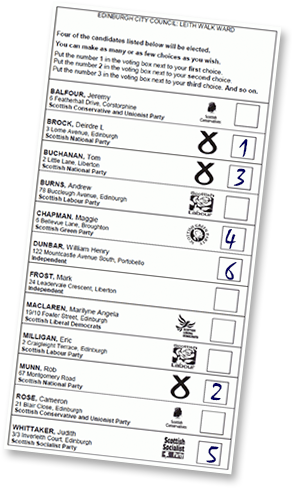 So how does the system work?

The first order of business is the Ballot Paper. This will list each Candidate, what Political Party (if any) they represent and includes a valid address. Party slogans, logo and campaign buzzwords are allowed. Candidates are listed alphabetically by their Surnames. A box to indicate voting preference is provided beside each Candidate description.

At the Polling Booth, Voters must rank the Candidates in order of preference using NUMBERS. Unlike other voting systems in use in Scotland, an X is not entered in ANY box. In the STV system, more than one Candidate can be selected and their preference is very important, so an X would be useless (how could you show your preference with a bunch of X's).

So beware! - any non-numeric mark in a box will probably render the ballot paper invalid.

Bearing all that in mind:

So, rank the Candidates of your choice in the appropriate order, stick the completed Ballot paper in the Ballot Box - and that's the involvement of the Voter at an end.

Counting the Votes and Allocating Seats

When the Polling Stations close, the Ballot Boxes are sealed and sent to the Counting Centres. This is where the hard work begins.

The following video explains the Candidate selection without getting too technical - this is probably as much information as most people will ever need on the subject.

Tactical voting between Political Parties is difficult to implement in this system, however, there will be an obvious attraction for Independence supporters to vote for SNP and Green Candidates with a high preference. Similarly, Unionist supporters will see some merit in voting for the three Unionist parties.

STV Ballot Papers list the names of the Candidates alphabeticaly by their Surnames. This is a known advantage for Candidates who appear at the top of the list because they often pick up votes from disinterested voters who don't really care which Candidate they choose - as long as they represent the Party they support. This can lead to a strong First preference for the Candidate who appears near the top of the list and can drastically reduce the First preference for their colleague who may appear further down the list. Apart from compromising the second Candidate, it could also deny the Party another seat.

There are a number of strategies to combat this alphabetical advantage when two Candidates are standing from the same Party. Parties will normally issue specific voting instructions, targeted at their known supporters to maximise the voting potential for both Candidates according to whatever strategy they see fit. These instructions are usually delivered through the doors during the campaigning period.