The Cause: A History of Scottish Nationalism 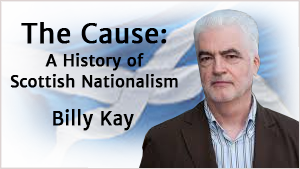 Scots Broadcaster and Social Historian, Billy Kay re-visits the 2014 referendum in an updated version of his radio documentary, The Cause.

The updated program covers the period of the referendum and the profound changes that followed, interviewing many of the key players involved.

This includes the recollections of the now First Minister, Nicola Sturgeon, - when she realised that Scottish nationalism was to experience an unprecedented “resurrection” (in Kay’s words) within hours of the September 2014 "No" vote. This began to show when her husband noticed that hundreds of people were joining the SNP in the immediate aftermath of the vote. This marked the start of the surge where SNP membership famously leapt from around 26,000 to more than 100,000 during the weeks that followed the referendum.

Kay is a declared supporter of independence, and a fair-minded one. He is infatuated with Scottish history, and the stories of Bannckburn, Waterloo and individuals like R.B.Cunningham Graham trip from his tongue as he discusses the nation’s history.

This article features all 6 episodes, recorded from BBC Radio Scotland broadcasts in 2015. Throughout the series, we hear how echoes from Scottish history resound down through the years and inform the rise of modern political nationalism.

Episode 1: The Battle for Scotland

Billy traces Scottish nationalism from the identity forged in the fires of the Wars of Independence to the rise of modern nationalism in the second half of the 20th century.

We hear the voices of people commemorating the Battle of Bannockburn and the Declaration of Arbroath. Historian Fiona Watson speaks movingly of one of the great unsung heroines Isabella Countess of Buchan who forsook her wealth, her husband and her status to crown Robert the Bruce at Scone - for this she was imprisoned in a cage in Berwick. Former First Minister Alex Salmond recalls stories of the men of Linlithgow he got from his grandfather and how they fired his imagination.

Identity and culture are at the core of nationalism as in the words of Fionn MacColla we were "Too Long in This Condition" as a cultural colony of England. This provoked a political backlash to what many Scots perceived as the inferiorisation of their culture in the universities and the media. Billy also explores the diversity of reasons why Scots feel a strong sense of identity - from the beauty of the landscape to the passion for their football, literature and music - all of which grace the series with songs from Burns to Hamish Henderson and poetry from Hugh MacDiarmid to John Barbour....

"...we haif the richt; And for the richt ilk man suld ficht." (Bruce's words to his men at Bannockburn - from Barbour's The Brus)

Episode 2: Free or a Desert

In this episode, Billy traces modern nationalism back to 19th century industrial unrest when socialists like Keir Hardie and Cunninghame Graham founded the Labour Party, and eventually the SNP.

He begins at The 1820 Society's commemoration of the skirmish at Bonnymuir during the radical uprising when men were hung and beheaded as traitors for demanding reform and the restoration of a Scottish parliament. The Strathaven weavers carried a banner with the words "Scotland Free or a Desert" and we hear a moving piece of music by young Sarah MacNeil, a student at the Royal Conservatoire of Scotland who was inspired by the sacrifice of the three martyrs James Wilson, John Baird and Andrew Hardie....the music is led by Sarah on clarsach and the suite is called "Free or a Desert".

Billy explores this link between the struggle for democracy and the demand for a Scottish Parliament in the rise of socialism with James Keir Hardie and R.B. Cunninghame Graham's founding of the Scottish Labour Party in 1888 with Scottish Home Rule at the core of its philosophy. Historians trace the formation of dedicated nationalist parties in the 1920's and '30's and the creation of the SNP. Tom Normand of St Andrew's University highlights the role of writers and artists in the period and the involvement of people like Compton Mackenzie, JD Fergusson and Hugh MacDiarmid.

By the 1950's we contrast the popular support for the idea of Home Rule expressed in John MacCormick's Scottish Covenant Association and the popular response to gestures like the liberation of the Stone of Destiny by Glasgow students, with the peripheral nature of the SNP throughout the period. In the words of former SNP Chairman, the historian James Halliday...."Arthur Donaldson used to claim that we only had a thousand members, and I used to say to him, "Arthur, you're an exaggerating old scoundrel!" There would be perhaps nearer 150 members in the whole country!".

"It was a sect. It was curiously like Trotskyism actually, and it was something that at that time was a blind alley." The intellectual Tom Nairn on Scottish nationalism in the early 1960's.

Nationalist activists describe how they were regarded as disloyal in a very unionist society and treated with a mixture of contempt and disdain and sometimes outright hostility - one man Gordon Caseley recalls his father's horror when his friend in the Special Branch told him that his schoolboy son had joined the SNP! Billy also traces the rise of Scottish cultural nationalism and the effect of the folk revival that swept Scotland and produced songs like the Corries' anthem "Flower of Scotland" We hear from Mary McCabe and former SNP leader Gordon Wilson of a nationalist pirate radio station called Radio Free Scotland and the SNP's struggle to get recognition for the nationalist movement on radio and television.

We detail the gradual transformation of the SNP from a small, marginalised "sect" to an organised political machine capable of achieving sporadic but spectacular successes such as Winnie Ewing's victory in the Hamilton by election of 1967. Winnie herself describes the personal abuse she endured at Westminster until Harold Wilson and Emrys Hughes put a stop to it. Profesor James Mitchell of Strathclyde University traces the hostility between Labour and the SNP to this period when Labour was challenged in its former heartland.

The victory though began a seismic shift in Scottish politics which had long lasting effects, bringing thousands into the nationalist camp and dramatically improving the image and profile of the SNP..."a wee nudge of the earth, a wee earthquake" as Jimmy Halliday describes it.

Billy begins with the rousing sound of a brass band playing Scots Wha Hae and the voices of men with pride in their heritage as Free Colliers and patriotic Scots.

We hear how the story of Wallace inspired Scots through the ages. In modern nationalist history, we focus on the heady years of the early '70's when Gordon Wilson's "It's Scotland's Oil" campaign led to the "high" of the SNP electing 7 then 11 MP's in 1974. We contrast this with the deep depression which emerged following the failure to reach the 40% vote for Yes in the 1979 Referendum.

Something akin to Civil War broke out in the SNP with the socialist wing led by Margo MacDonald, Jim Sillars and Alex Salmond vying with the fundamentalist wing of the party for supremacy. The First Minister describes the hurt he felt when he was expelled from the Party, and the "speech of my life" he gave to have him and other members of the '79 Group re-instated.

We trace the growing feeling of alienation among Scots of different political persuasion under Thatcher's Tory government leading to a huge surge in demand for a Scottish parliament which culminated in the successful Referendum of 1997. We celebrate the international dimension of Scottish nationalism expressed in Hamish Henderson's song "The Freedom Come All Ye" which became an anthem for the pro parliament groups in the period.

In this episode, Billy examines the coming of the Scottish Parliament and how it transforms the SNP. Peter Lynch of Stirling University contrasts the sacrifice of previous generations with the present situation where you can actually have a career with the SNP - "older nationalists would have thought they had died and gone to heaven" in such circumstances. We contrast the civic nationalism of Scotland with ethnic nationalism elsewhere, but show how the SNP has had to deal with groups which endangered the democratic credentials of the party.

We hear historians discuss the Union of 1707 and the echoes from the 18th century in the present day where e.g. Professor Allan MacInnes of Strathclyde university points out that the support for the SNP in the 2007 Election was very similar to the support for the Jacobite Rising in 1715!

Those historic words uttered by Winnie Ewing at the opening of the Parliament in 1999 was the first major step in righting a wrong that dated back to 1707.

Nationalists who have devoted their lives to the Cause of Scottish independence talk about their optimism for the future and the kind of Scotland they envisage if they achieve what their opponents would say was their dream, and they would say was their destiny as citizens of an independent nation. The First Minister says that Scotland can be "a very special place." Whatever happens in the future, nationalist will remain committed to the Cause, and inspired by the words of the founder of the National Party, Hugh MacDiarmid who wrote:

"For we hae faith in Scotland's hidden pouers
The present's theirs, but aw the past and future's oors.

In this, the final episode, Billy considers what happened to the national movement over a turbulent and emotional period covering the Yes campaign, the Referendum and its dramatic aftermath. This saw a surge in SNP membership and the resurrection of the movement culminating with an SNP landslide in the 2015 General Election. When Billy asked Alex Salmond to sum up what had taken place in the Cause's recent history, he replied. "Well, I suppose, in a nutshell, we lost the Referendum but we might be well on our way to winning the country."

We focus on the creativity and diversity of the Yes campaign where disparate groups like Women for Independence, Business for Scotland, and the artists of National Collective came together in a common cause. Billy interviews Chris Law MP, whose beautifully refurbished fire engine, "Spirit of Independence" inspired people to join a burgeoning campaign. First Minister Nicola Sturgeon said that the engagement of the grass roots events that she attended made this "the most energising experience" of her life.

Dundee had a vibrant Yes team, and Billy records their highs and lows. Harry Marshall was responsible for registering over 3000 people to vote. One of those queuing to register told Alex Salmond he was doing it because it was the first time in his life he had experienced something worth voting for!

The Referendum defeat was one of the worst experiences of these peoples lives, yet within days the surge of people joining the SNP gave the party and the Cause renewed hope for the future. Energised once again the new momentum carried into the General Election victory. Everyone Billy spoke to, young and old is now convinced that Scotland will be independent within their own lifetime.