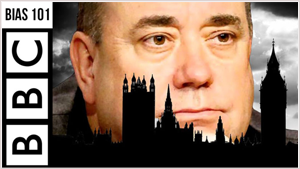 London Calling is a very powerful documentary inspired by the book of the same name by GA Ponsonby.

Exposing the spin, deceit, manipulation and corruption by the BBC during the 2 year Indy campaign it is an eye opener that will shock a significant number of Scots.

We on the Yes side are aware and have argued some if not most of the content in this video, but when you see it all put together like this, then it makes it all the more powerful. Sadly, the agenda is still alive and kicking - evident in every topic broadcast about devolution, the Scottish economy and Scottish independence since the referendum result.

During the campaigning and eventual outcome of the EU Referendum, the same bias has come to the fore regarding Scotland's desire to voice her opinions in the forthcoming negotiations. The predicable ploy of highlighting leaked documents from Civil Servants is back in the news, as is claims that Spain would block any chance of Scotland retaining membership of the EU and the continual demand for Nicola Sturgeon and the SNP to get on with the day job of running Scotland instead of obsessing over independence (all claims from the Unionist opposition who, ironically, are the only ones bleating on about independence).

The propaganda hasn't let up and if anything, looks like its getting worse.

Where the Union is concerned, the goal is to remove any threat that may fragment it and this objective appears to be one of the highest priorities for the Establishment.

Watch and learn, the worst is still to come.

Shortly after the Scottish Independence Referendum, social media commentator GA Ponsonby launched an appeal in order to fund the writing and promotion of a book chronicling the role played by the BBC in helping to turn what appeared to be a narrow win for the Yes campaign, into a narrow defeat.

London Calling has been read by thousands of ordinary Scots and is now available free to read here.

Inspired by the book, I launched my own appeal in order to raise £20,000 for the purposes of producing a documentary I hoped would complement the book. In June this year a seventy minute documentary, also called London Calling, was released.

The documentary is now being shown around Scotland at events hosted by dedicated pro-independence activists. Clubs, theatres and pubs have hosted special screenings of London Calling. The response to the documentary has been overwhelming with activists keen to promote the film to as wide an audience as possible.

In order for the film to realise its full potential and to maximise impact, it has to be viewed by people who would not ordinarily question the political output of BBC Scotland. To that end, I have decided to launch this special appeal aimed at raising funds in order to produce DVDs.

The target of this appeal is £20,000. A not insignificant sum. Should it be reached it will allow us to create fifty thousand professionally made DVDs. The DVDs will come in a specially designed folder that will complement the quality of the documentary contained within. Each DVD will contain the option of displaying subtitles.

Of course the target is not a limit. Every extra pound donated to the appeal will guarantee additional DVDs. The more we can afford to order, the less each single DVD will cost.

The Yes movement exists because people give of their own time. These foot-soldiers are the reason the dream of an independent Scotland remains live and breathing despite the 2014 result. There is no shortage of volunteer groups willing to distribute these DVDs. By the Spring of 2017 we should be ready to begin distribution into homes in localities throughout Scotland.

If successful, by the time of the next independence referendum, a great many more Scottish voters than would otherwise have been the case will apply a healthy scepticism to output from the so called 'public service' state broadcaster.